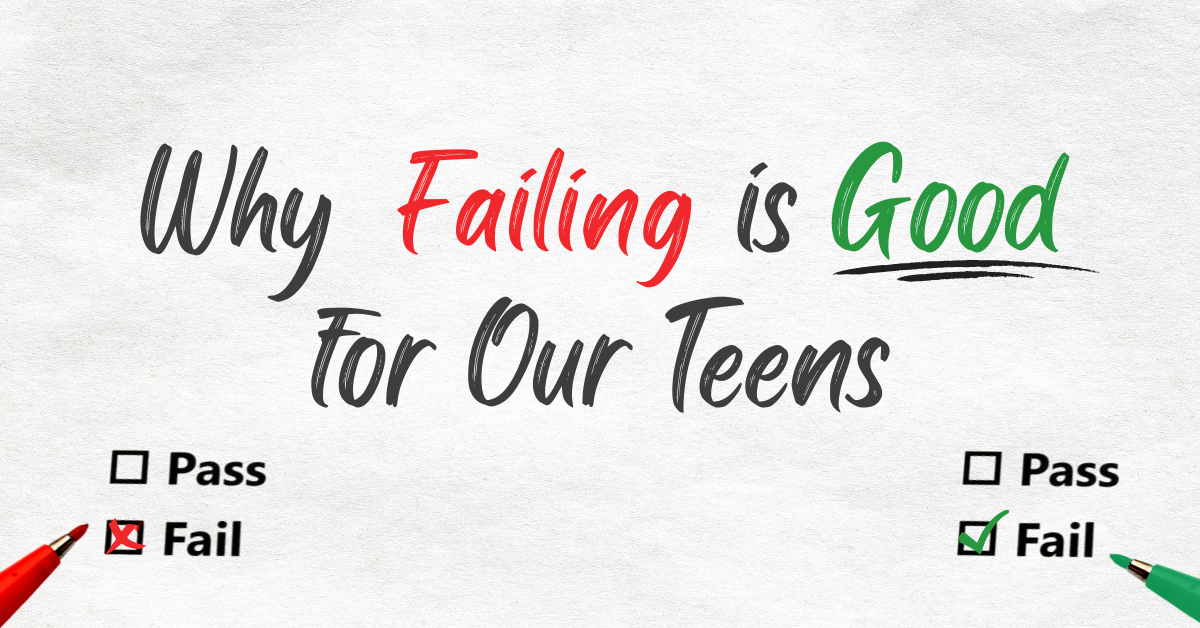 Recently, we looked at the need for healthy margins in our teens’ lives, so that in the midst of their busy (and often stressful) schedules with school and extracurricular activities, our teens have ample space and time to reset, physically, mentally, and emotionally. Another important element for us parents to build into our teens’ lives is the space and opportunity to fail.

Perhaps you just re-read that line, making sure you read the word FAIL correctly? In a culture that celebrates success and accomplishments (which are routinely featured on our Facebook or Instagram feeds), with SAT exams and college scholarship applications looming ahead in the near future for our students, this thought might seem strange. Why would we ever want our teens to fail?

The answer is because one of our greatest jobs as parents is to prepare our teenagers to successfully navigate “real life” as adults. Successful “adulting” takes resiliency and intrinsic motivation as well as the ability to learn and grow from mistakes, and nothing develops those qualities like failing, making needed adjustments, and trying again. In fact, if we do not allow our young people to experience failure as children and teenagers, when the stakes are relatively low but the value of lessons learned is profound, they may very well find themselves unprepared for life in areas where the stakes for failure are decidedly high. If we let them try and fail now, under our guidance, they can develop the necessary skills to truly succeed later (without us).

In his excellent book 12 Huge Mistakes Parents Can Avoid, Dr. Tim Elmore asserts, “When people—especially young people—know they are free to try something and fail, their performance usually improves. It brings out the best in them. But if they are preoccupied with trying not to fail, they become paralyzed” (p.34). Naturally, we all want to bring out the best in our teens! We do not want our teens to be paralyzed with a fear of failure that discourages them from taking needed risks or creating something amazing at some point.

The acclaimed inventor Thomas Edison declared, “Our greatest weakness lies in giving up. The most certain way to succeed is always to try just one more time” (Source). What if we flipped the script on failure in our teens’ minds, presenting it as a valuable and even necessary pathway to success?

Sometimes we as parents do not make room for teens to fail because we are concerned about significant consequences linked to their failures. Take driving, for example. Many teens today are delaying getting their driver’s licenses, waiting until they are 17 or even 18 to do so. According to the Wall Street Journal, “About a quarter of 16-year-olds had a driver’s license in 2017, a sharp decline from nearly half in 1983, according to an analysis of licensing data by transportation researcher Michael Sivak” (Source). Doesn’t one fourth of eligible teenagers having their driver’s licenses seem low? Most of us in our adolescence couldn’t wait to get that laminated plastic card (and the freedom and greater responsibility it represented)!

Some parents today, however, see this delay as a good thing, particularly as texting-and-driving is a new (and terrible) reality that we didn’t have to navigate as teens ourselves. Might it be better to allow our teens to depend on us a little longer and avoid the risks involved with driving today? That question is a valid one; however, we must keep in mind that there is more to driving than the risk. The experience of taking a course and applying that knowledge over time as one practices under the intentional mentoring of an invested parent or guardian, allows our teens the opportunity to develop greater maturity and responsibility, healthy independence, and driving skills that will be useful as an adult.

Similarly, one night when I debated the wisdom of allowing our teens to use social media, my husband posed this question to me: Would you rather have them try and fail sometimes under our watchful eye and mentoring OR create forbidden fruit that they will have zero experience with once they become independent adults on their own? Recognizing his logic, we moved forward by allowing our teens the opportunity to use social media with healthy boundaries and accountability measures in place. We did not leave them alone to fail; we mentored them regarding wise social media practices and then made space for them to attempt to succeed (while providing needed accountability, support, and additional mentoring for the times that they didn’t).

Allowing teenagers to fail can be inconvenient and even painful as a parent. However, the growth our teens gain from navigating failure (with your coaching) makes it worth it. Watching our teen apologize for a failure and then make things right with another family, for example, is much less painful than watching our teen stand before a judge and attempt to make things right with society. That’s a drastic example, thankfully. Most of our teens simply need to learn that trying something and failing is not the end of the world. In fact, it’s in those moments that we all grow, develop, and become someone who has the tenacity and capacity to succeed!

As always, kudos to all of you parents investing in your teens day in, day out! Your mentoring is a true game changer, especially as you help your teens leverage moments of failure while on the road to becoming successful adults.

In the parenting trenches with you,
Lisa Raftery

The Power of Gratitude